OWL The great grey owl is a large and impressive bird of prey in the northern taiga zone whose acute sense of hearing enables it to swoop down on its prey trough even the deepest snow. Its large-eyed furry chicks have very likely given rise to several stories about gnomes. The great grey owl ferociously defends its nest and its young – bird ringers have to gear up with good protection when climbing up to an owl´s nest. 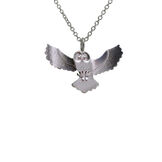 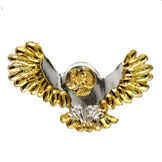